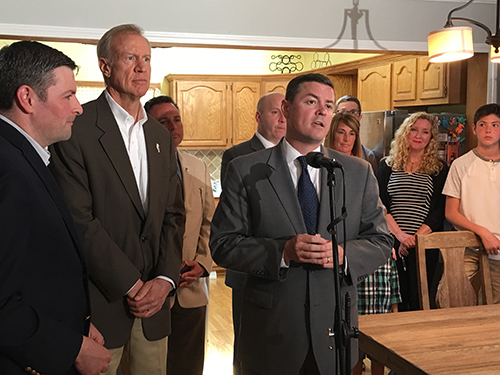 Illinois children suffering from autoimmune disorders associated with strep throat infections are now guaranteed health coverage, thanks to the enactment of "Charlie's Law."

Cosponsored by Sen. Chris Nybo (R-Elmhurst), the law is a result of a near-deadly incident in Lombard in which 8-year-old Charlie Drury’s strep throat infection became a severe mental disorder.

PANDAS can be cured by a specialized vaccine or medically advised treatments, but treatment can exceed $10,000 without health coverage.

“Anything that we can do in this state to get medical treatment for kids who need it, I will always be on board,” Nybo said in a recent press release. “I’m delighted to see this bill signed, especially after having gotten unanimous support in the State Legislature.”

Rauner signed the bill in the Drury family home.

Nine-year-old Griffin Brejcha, who also suffers from PANDAS, was also in attendance. He is expected to begin insured treatment this week.

Want to get notified whenever we write about Illinois State Senator Chris Nybo (R-24th) ?

Sign-up Next time we write about Illinois State Senator Chris Nybo (R-24th), we'll email you a link to the story. You may edit your settings or unsubscribe at any time.