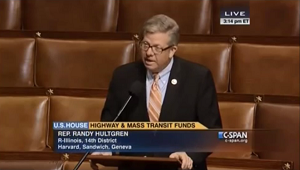 During a recent debate on the House floor concerning the Surface Transportation Reauthorization and Reform Act of 2015, which passed the House on Thursday, U.S. Rep. Randy Hultgren (R-Dist. 14) secured a commitment from Bill Shuster (R-PA), chairman of the Transportation and Infrastructure Committee, to focus efforts on funneling federal transportation dollars to suburban areas.

The bill is on its way to the conference process, and lawmakers with suburban constituencies want to ensure that funding is equitably split among urban, suburban and rural communities.

“This bill dedicates discretionary grant funding to freight and highway projects of national significance,” Hultgren said on the House floor before passage. “Though this program is of vital importance to projects in all of our districts, there appears to be a bias on how the vast majority of funds have been awarded by the U.S. Department of Transportation, and suburban projects appear to be often ignored. I ask the chairman to be mindful of the distribution of such funding levels as it pertains to suburban projects…I would ask that as this bill moves to conference, we work together to find some level of equitable distribution of federal funds to suburban areas.”

Hultgren said transportation officials from Cook, DuPage, Kane, Lake, McHenry and Will Counties recently sent a letter to Hultgren, urging him to raise the distribution issue before the House finishes work on the highway bill. Hultgren remains focused on the long-term infrastructure funding needs of Illinois, as he hosted Shuster and representatives from Illinois transportation authorities, county and city governments, universities and industry for a recent meeting on funding equity and other transportation-releated issues.