Boy with brain tumor becomes DuPage deputy for a day 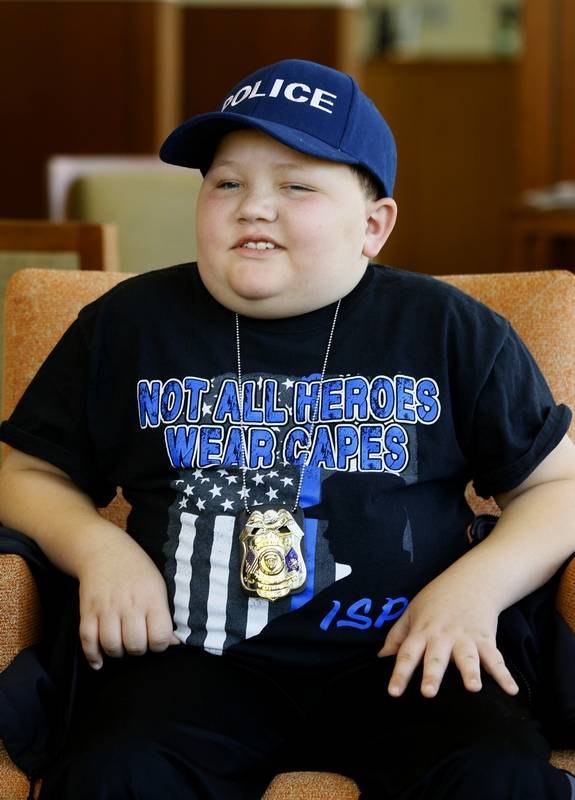 An 11-year-old boy who is receiving treatment for a brain tumor was sworn in recently as a DuPage County sheriff's deputy for the day, the Daily Herald reported.

Drake Price of Warsaw, Indiana, who said he wants to become a police officer, receives treatment at Northwestern Medicine Chicago Proton Center in Warrenville. The tumor, discovered in February, is the size of a baseball.

Although the tumor is benign, it caused Price to have three strokes in one day, as well as severe headache symptoms.

During his treatment on Sept. 12, Drake was visited by DuPage County Undersheriff Frank Bibbiano and six other law-enforcement officers. Price was sworn in on the spot as a junior deputy for the day.

Bibbiano performed Price’s honorary swearing in, which included an oath to "help his friends and family."

Price’s parents and two of his four siblings were in attendance.

Price also went for a ride in a police Humvee and in an armored personnel carrier from the DuPage County sheriff's office SWAT team.

Want to get notified whenever we write about DuPage County Sheriff's Office ?

Sign-up Next time we write about DuPage County Sheriff's Office, we'll email you a link to the story. You may edit your settings or unsubscribe at any time.