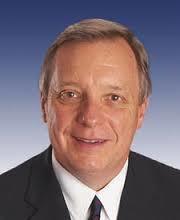 The bill would address the rising number of poisonings in children due to liquid detergent packets.

“A couple months ago a doctor from the Chicago area who was part of the National Poison Control Center alerted me to this situation,” Durbin said. “How many things do we have in our home that have child-proof caps on them to protect kids from their curiosity?"

The proposed legislation would require child-proof packages for containers of liquid detergent packets; design and colors less appealing to children; packet composition changes so that exposure consequences are less severe; and warning labels to alert consumers to the potential risks of laundry packets.

“When you look at these packets, you think, how would a kid know the difference between something that is toxic and something that is sweet – until they bite into it," Durbin added. "To the industry, don’t wait to make these products safer. Do it yourself and do it in a hurry, because kids’ lives are at risk."

Chicago native Dr. Kyran Quinlan, pediatrician and chair of the American Academy of Pediatrics’ Council on Injury Violence and Poison Prevention, was among those who spoke in favor of the act.

Want to get notified whenever we write about U.S. Senator Richard Durbin ?

Sign-up Next time we write about U.S. Senator Richard Durbin, we'll email you a link to the story. You may edit your settings or unsubscribe at any time.